Ever been curious about your mixed breed’s genetic heritage?  It is possible to discover your dog’s genetic makeup through a simple, painless cheek swab test.  We spoke to Mindy Tenenbaum, Founder of DNA my Dog about breed identification testing that can tell you with certainty what breed your dog is.

How long has DNA My Dog been in the industry and what was the inspiration behind starting the company?

We have been in business for over 11 years now, how it started was that I used to work in a completely different industry, in publishing and marketing but also in dog rescue where I was part of a big event in Toronto, Canada.  I was approached by a company that did DNA testing for dogs, to be involved in the event which was the first that I actually heard of DNA testing for dogs.  This sparked the interest for me,  At the time I had a family member who was just starting in the DNA space for people and we were discussing how interesting it was that you could do that.  I started researching and thought it would be a great thing to do to help rescue dogs and to help rescues raise money.  I contacted a company in the US and worked with them to bring the DNA tests to Canada, I was working with a lot of rescues helping them use it to raise money which started doing really well so over time we ended up buying the lab from them, bringing it into Toronto, taking over the business and that’s where we are today.

What kind of information can a pet owner expect to receive after doing a dog DNA test?

With our regular general DNA test, which is the most common test that we do a person would send a sample from their dog which is just a quick and painless cheek swab, send it in and we extract and sequence the DNA.  Within two weeks they get a report which shows every breed by percentage found in their dog.  In addition we give them generic personality traits and health issues that those breeds might have for more insight into the breeds that were found, which is especially helpful for people who find out that their dog is a breed that they are not familiar with.  If pet owners want more information, they can always go into our app to learn about those breeds in depth but usually we find that people just want to know what breed is in their dog.  We find that especially with shelter dogs and dogs that have been found or adopted and the background of the dog is not necessarily known too well.

How much of a dog’s behavior is determined by their DNA – is this something that you would recommend to pet owners that may be struggling with the behavior of their dog?

It can be really helpful for a number of people however if you have a purebred Golden Retriever and you know that is the breed of your dog we are not going be able to help you because we will just give you a test back confirming what you already know.  If you have behavior issues you should then probably seek some training and help. A lot of people think that they have a Golden Retriever or are not sure and they are trying to work with that then they get a result back and surprisingly the dog is a Boxer, Soft-coated Wheaten Terrier, AmStaff mix or something and that is when it is really helpful because you are going to completely change the way that you train the dog.  For example if you are trying to train a Retriever and you are continuously throwing a ball and they are just staring back at you and then you realise you have a hound dog, that dog is not going to bring you back the ball as with the hound type dogs, you have to make them think they are doing it on their own and not for you, whereas a retriever wants to please you more so it really does help with the training of the dog when you know what the breeds are.

Your sister site Allergy Test My Pet focuses on allergens that may be affecting your dog, is this discovered through DNA testing?

The allergy test is completely different, its not a DNA test but a saliva test that measures the proteins against 100+ allergens.  We find with that test it is more pure-breed dogs that we are testing as they seem to have a lot of allergy issues.  The test will report back everything that a dog is reacting to.  We have done a ton of research to make sure that we are testing a wide range of allergens, as much as we can right down to the minor ingredients you may find in dog food.  For instance a lot of people may think their dog is allergic to chicken so they buy all kinds of food that does not have chicken in it and they can’t seem to figure it out but it turns out that the dog was allergic to rosemary or sorghum or wheat or a really minor ingredient that the dog may be reacting to.  Sometimes it needs a simple switch to a food that does not contain these minor ingredients.  We test for common household cleaners, we test for grass and pollen which you cannot really do a lot about but is still really helpful for people to know the causes.

What is next for DNA My Dog in the near future?

Right now with everything going on in the world we are working with a lot of shelters and rescues to help them raise money because it is really tough for them at the moment as people don’t have the money to give them any more so we shifted our focus to that.  It seems everybody has bought a puppy or adopted a dog during this time which is great, so we have been very busy doing those tests.  We have a couple of tests that have done really well for us that we will be putting a larger focus on.  One for example is our Deceased DNA Test which we are the only people in the world that do this specific test, this is for if your dog has passed and you have always wanted to do a DNA test but never did.  We can test with anything from a tooth to a toy, anything that the dog’s mouth has come into contact with.  We send it to our partner lab at a university, the Paleo DNA Laboratory, they then extract the DNA from the item and send it back to us for testing.  We get a lot of interest in that test right now so we will be doing some more work with that to see what more we can do.  We also have another test that we have a patent pending on which is a Canine Genetic Age Test.  It’s a telomere test that measures the telomeres in the dog to give you the genetic age of the dog and we are trying to work with that to discover if there is more that we can do for people to understand the health of their dogs.  People come to us because they want to know the breeds of their dog but are also starting to want to know more than just that, more health information. 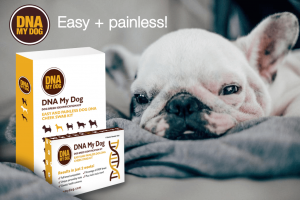 Do you have any advice for new potential pet owners who are looking at adopting a dog on starting the process or resources to consider?

There is a lot of work that the Humane Society of the United States has been doing about where not to get a dog from and we are very passionate about that.  There are quite a few places that do not have reputable breeders and we find through testing enough to raise concern when people go to not the best place to get a dog and spend a good amount of money on buying a certain breed only to find out it is not that breed and that’s pretty much every time, its never what the people are told.  My personal concern doesn’t lie with the person who bought the dog or what the breed of a dog is but my concern is where that dog came from, what condition the parents are living in and what is happening in these places, that is something that needs to stop.

If I could give some advice right now, as someone who also runs a rescue, I would love to say to people I think it’s fantastic that people have dogs and I know it’s helping so many people through these horrible and uncertain times.  I think a dog is probably saving people’s lives right now and I am so happy to see the dogs not in shelters but what I would say is please consider your lifestyle and home.  You might be furloughed, working less hours or doing a lot of work from home at the moment and it seems like a good time to get a dog but do consider your lifestyle when you get called back to work or when your lifestyle is different, what is going to happen to that dog.  Are you home with the dog 24/7 living in a condo and then when going back to work the dog is barking all day, you may have to give up the dog.  Are you working with the dog now that you can slowly get it to learn to not be with you all day.  When your kids end up going back to school is your dog going to be okay, can you learn some steps to take to make sure your dog is okay.  I just worry that the whole influx of dogs that went out to be adopted to people, that a number of them may end up coming back to the rescues and shelters when people’s lives go back to normal.  I hope that is not the case but I would ask people to strongly consider that before getting a dog.

Give us your opinion

Thanks for your feedback!

Chené Murphy is a dynamic content creator with a strong interest in health and wellness. Residing in the cosmopolitan city of Cape Town, South Africa, Chené is passionate about travelling and connecting with others from around the world.

Chené Murphy is a dynamic content creator with a strong interest in health and wellness. Residing in the cosmopolitan city of Cape Town, South Africa, Chené is passionate about travelling and connecting with others from around the world.
Latest News
Affordable And Secure DNA Sequencing With Nebula Genomics Horizon Supports Scientists On The Path From Research To Therapy 8 Best DNA Tests for Weight Loss in 2020 Best at Home Cheap (Yet Accurate) DNA Tests in 2020
Full Transparency Guarantee: We take pride in being one of the only comparison websites where users can freely share and contribute their personal reviews on DNA and genealogy-related products in a safe community. Some of our content does contain links to products from one or more of our partners. We may receive compensation when you click on one of these links.