Findmypast Review 2021: What Will It Reveal About Your History? 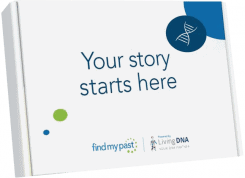 If you want to explore your British/Irish ancestry, you should consider a DNA test with Findmypast. Not only does this vendor have the largest database of records available from these countries, but you can upgrade to test your Y-DNA and mtDNA to trace your paternal and maternal family lines. The price is pretty expensive for what you get, so you might want to consider uploading raw data that you get from another vendor to save some money.
Written by Eric Michelson
6Findmypast Coupons Visit Site
6 Coupons Visit Site
Written by Eric Michelson on January 3, 2021

Bold Claims About Testing Your British and Irish Heritage

This company claims to offer one of the world’s most advanced DNA tests that allows it to “provide twice the level of detail of any other ancestry DNA test.” Of the 80 global regions it maps, 20+ are in Britain and Ireland.

Could this company really be better than market leaders AncestryDNA and 23andMe, especially if you want to discover your British or Irish backstory? Let’s take a look.

Findmypast Coupon #
*Offer Valid Until
Purchase DNA Test to Claim FREE 2 Week Subscription
*Offer Valid Until
Delve deep into your family history with a FREE 14-day subscription to Findmypast’s records with each ancestry DNA purchase. Discover your where you come from, the origins of your ancestors, and even contact living relatives at no extra cost.
FREE 14-day FindMyPast Subscription with DNA test purchase!
GET THIS DEAL NOW!

The simple four-step testing process involves ordering online, activating your kit, sending in your cheek swab sample, and viewing your results in six to eight weeks:

Buyer beware! I like that you don’t have to spit into a test tube or prick your finger for a blood sample, but I don’t like the encouragement to activate your Findmypast 14-day free trial as soon as you get your kit. Of course, you’ll want access to the historical records, but remember that it can take up to two months to get your test results. Take my advice and wait for your results before taking the trial and (ultimately) starting a monthly subscription.

Taking DNA tests can become addictive (for some of us), so you might already have raw DNA data from another service, such as AncestryDNA or MyHeritage. Upload those here to get Findmypast’s additional insights, for free.

The autosomal heritage test from Findmypast’s testing partner (Living DNA) provides a detailed analysis for 21 sub-regions in the British Isles, which – it claims – is way more than any other DNA testing service.

The “Deep Ancestry Upgrade” adds mtDNA and Y-DNA testing so that you can trace your maternal (mother’s side) and paternal (father’s side) lineages. Not all testing companies offer this, which means you won’t get as much information about how your ancestors moved around the world as you do with Findmypast.

Keep in mind that the Y-DNA test is only available to those who have Y chromosomes (i.e., men).

You don’t have to purchase a subscription to start building your family tree with Findmypast. You can also search through millions of records – including U.S. census data, U.S. and Canadian births/marriages/deaths, and Irish Roman Catholic parish records – for free. That said, a subscription gives you access to a lot more data and extra features like common ancestors.

Findmypast’s database contains more British and Irish historical records than any other genealogy or heritage testing site. Going back as far as the U.S. Revolutionary War and even the Dark Ages, these records include newspapers, immigration records, court records, military reports, and work contracts.

The 1939 register details the precise location that 41 million people in England and Wales were living just before the Second World War. You can see original handwritten registers, interactive neighborhood maps, lists of household members, and potentially discover long lost relatives.

Link the Living DNA Results to Findmypast in 6-8 Weeks

In six to eight weeks, your DNA results will come from partner provider Living DNA (rather than Findmypast), so the first step is to link the two sites together on Living DNA’s website. This will help you search for potential relatives:

You’ll get a detailed map and sub-regional analysis of where your heritage is from. If you ordered the “Deep Ancestry Upgrade”, you’ll receive those results along with the regular ancestry results in the same personal server.

Living DNA’s results include a detailed map and a pie chart breakdown of your ancestry that includes 80 world regions and a sub-regional analysis of your UK and Irish heritage. 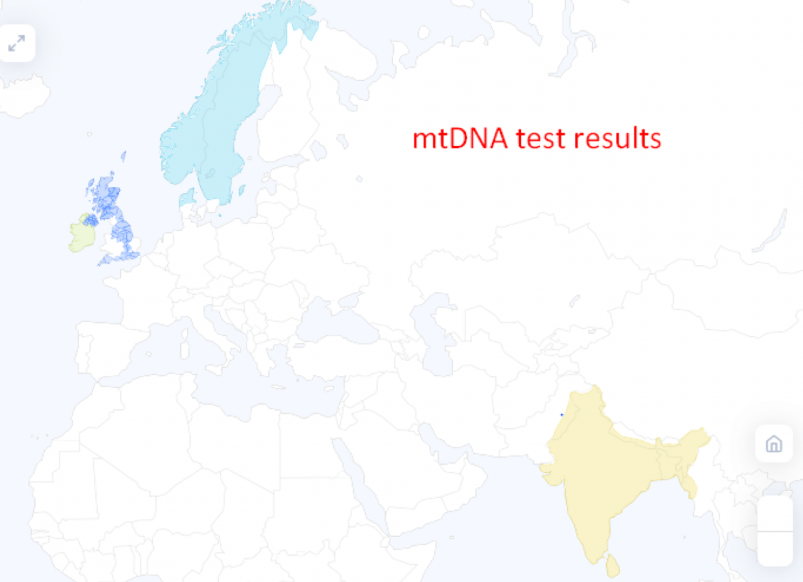 Unlike some genealogy companies, you don’t need to purchase a subscription to build and add entries into Findmypast’s family tree. The program even gives you “hints” as to who might be part of your family tree.

You can also search through millions of records including US census data from 1790-1940, public BMD (birth, marriage, and death) records from the US and Canada, and over 7 million Irish Roman Catholic parish records. Although this is free of charge, a subscription gives you access to a lot more data and extra features.

I should also mention the “1939 Register” that includes original handwritten documents, interactive neighborhood maps, and lists of household members from the eve of WWII.

Findmypast charges more than Living DNA for the exact same tests. Although you get onboarded automatically onto the Findmypast system with its free two-week trial, don’t forget that it encourages you to start the trial before you really need to.

Since there is no linkage between Living DNA and Findmypast that would allow you to add matches to your family tree, you might wonder why you should take the test through Findmypast. In fact, it’s actually cheaper to buy the same test through Living DNA then sign up for a Findmypast premium membership.

If you’re willing to pay, the ultimate plan provides a lot more value for not much more money. If you don’t want to pay, you might be able to satisfy your more limited curiosity with the free plan. Alternatively, the “pay as you go credits” let you buy individual records without having to commit to a subscription.

One more cost to keep in mind: While your return postage is prepaid for submitting your sample, you’ll still have to pay a delivery fee for the initial test kit.

Findmypast Coupon #
*Offer Valid Until
Purchase DNA Test to Claim FREE 2 Week Subscription
*Offer Valid Until
Delve deep into your family history with a FREE 14-day subscription to Findmypast’s records with each ancestry DNA purchase. Discover your where you come from, the origins of your ancestors, and even contact living relatives at no extra cost.
FREE 14-day FindMyPast Subscription with DNA test purchase!
GET THIS DEAL NOW!

Findmypast provides phone and live chat support during working hours on weekdays, it also claims to answer all emails within 24 hours on business days. Indeed, my contact form submission received a response within 24 hours (if only to refer me to Living DNA): 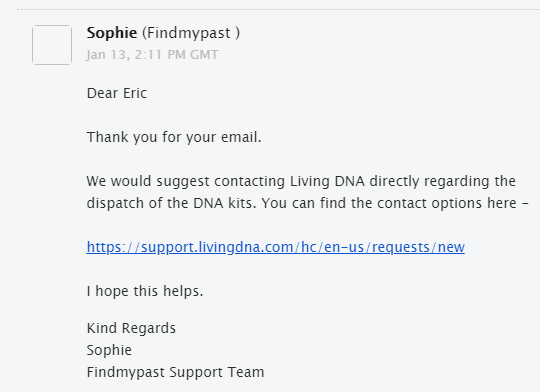 I also received rapid responses via the live chat channel, although the agent had trouble convincing me why I should pay more for Findmypast’s DNA test rather than Living DNA’s: 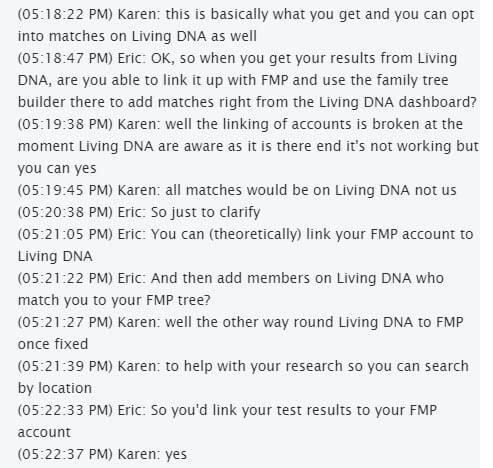 For self-support, a decent set of FAQs should answer most of your questions, so you probably won’t need to contact the support team at all.

Better Off Buying Living DNA Instead?

Findmypast’s DNA tests are no different from Living DNA’s. For the extra cost of going through Findmypast, the linkage between the two systems isn’t as smooth or effective as I would like, especially since you can’t add matches into Findmypast directly from Living DNA.

In my opinion, unless you’re specifically interested in delving deep into your British or Irish heritage for a genealogy project (which is where Findmypast shines), you’d be better off going directly to Living DNA for ancestry results. By doing so, you’ll still get a detailed analysis for 21 sub-regions in the British Isles. After that, you can sign up to Findmypast separately, if you want. 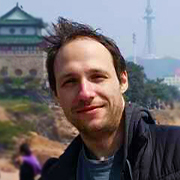 Eric Michelson
Eric Michelson
Eric Michelson is a multi-disciplinary researcher, holding an Associate degree in Applied Science and a Bachelor's in Music. He has spent the past decade traveling, interacting with many of the diverse cultures around the world. He loves helping people tune into their roots, both physically or mentally, and he believes that exploring a family's unique history can uncover hidden opportunities for deep personal transformation. 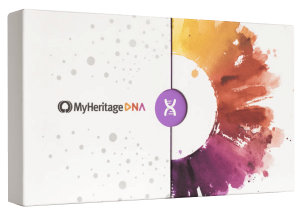 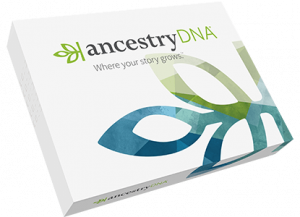 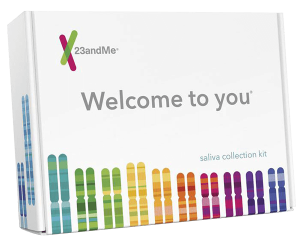 No user review found. Be the first Findmypast's reviewer!

Please enter your email address to submit your review

Visit Site
Full Transparency Guarantee: We take pride in being one of the only comparison websites where users can freely share and contribute their personal reviews on DNA and genealogy-related products in a safe community. Some of our content does contain links to products from one or more of our partners. We may receive compensation when you click on one of these links.